The month of June marks the halfway point of the year. It's a great time to examine your goals and your progress towards them. Upon reflection of my journey, I recall how Oscars night had a positive influence on my career outlook for 2015. My good friend Dionne Audain, who is also a fabulous actor, emailed me a newsletter from casting director and audition expert, Amy Jo Berman.

The newsletter contained "Oscar watching instructions for actors who want more work."  The instructions were to watch the Oscars with a notebook (or phone device) and make a list of the actors you would like to work with during your acting career. Next, make the mental shift of looking at the actors on your list as your colleagues now.

Coincidentally, I've always imagined myself at the Oscars every time I watched them. I imagined the Oscar I would win and the people I would thank during my speech. I even imagined the tears streaming down my face, however I don't recall visualizing the actors sitting in the audience as my future colleagues. So when I read Amy's newsletter, I realized I had found the missing link in my visualization process. This connected to the career clues I received from the universe as well. Let me explain.

Last year, having been in LA for only two weeks, my husband and I attended an Oscar viewing party at the Million Dollar Theater. I wore my favourite evening gown, a glorious yellow Jovani gown which I received from a pageant wardrobe sponsor. I was crowned 'Mrs. DC America' in this gown so I was feeling majestic and complimented by my husband, who looked quite dapper in his tuxedo. We walked the red carpet while photographers captured photos. A photographer from the Los Angeles Times approached my husband and I for our names and asked where we were from. Ironically, the photographer was from my hometown, Detroit. It's always great to meet someone from your hometown! After that conversation, I knew it was going to be an amazing night. Before the Oscars began, the event organizers held several contests, among which was a fashion contest. My husband and the lady sitting behind us convinced me to enter. As soon as my foot touched the runway, I was back into my pageant trance and I smiled at the judges who included designers to the stars (one of the judges designed Brittany Spears attire during Oscars night). Well I won the fashion award!!! And part of my prize package included a one year membership to the Grammy Award Museum which I thought was interesting because, as a poet, I felt I was receiving a clue that poetry/music will play a role in my acting career. The award was humbling and also a pleasant blessing.

I can say I was a winner during Oscars 2014 night--Fashion Award Winner! 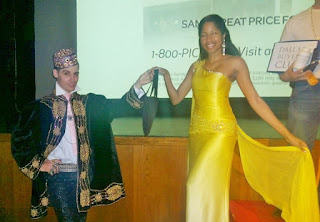 Fast forward to this year's Oscars 2015, for which I had already decided I would attend a high profile Oscar party. But after reading Amy's newsletter, my purpose was more defined. I will attend a party with the definite purpose of meeting my future colleagues. I watched the Oscars at home, took notes and felt a mental shift toward my destiny. My husband was so gracious and bought me red roses, caviar and champagne named after me. He said, "You're a star, get ready!" I hadn't yet explained my technique to my husband so the gifts were a surprise and confirmation that my mental shift was already working. 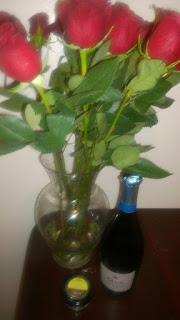 Then it was time to attend a party with the new mindset to meet my future colleagues. I've always felt a higher power is gracious and places you where you need it to be. I received the blessing to attend the elite Elton John Oscar party at the Pacific Design Center, the proceeds of which benefit the Elton John AIDS Foundation. Remember I said I have a feeling that music may play a role in my career? My instincts were confirmed because I later learned the majority of the attendees were great actors and well-known singers. I felt glorious walking the white carpet. 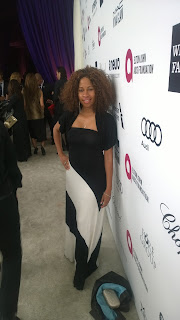 Just minutes after I stepped off of the carpet, I met Toni Braxton, wow! She was so gracious and she suggested we take a picture, double wow! My mental shift was working. Toni is a Grammy award-winning singer and she has a television show. 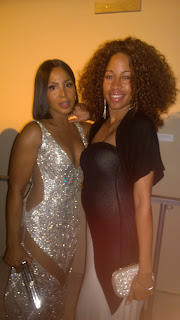 Soon I found myself meeting 'Temptation' actress Jurnee Smolett.  I  also crossed paths with  Jessie Smollet (Jurnee & Jessie are siblings), Grace Gealey, Bryshere Gray, and some of the stars of FOX's hit show 'Empire' where music also plays a role in the storytelling. They were all so very kind and gracious. I was smiling the entire night, serendipity had occurred. I decided Oscar Night was the night to meet my future colleagues. I made a list, but also remained open to the actors I would meet. I was blown away and very humbled. Now you have more insight as to which TV drama series I'm targeting to join as a series regular... Make a mental declaration to meet your colleagues and let the universe meet you at your command or pleasantly surprise you!

I believe in you, until we meet again, I wish you continued blessings.