As actors, we work with language in the most intimate way possible. Someone else's words expand in our mouth, and often in an accent or language that is foreign to us.

I was very lucky to grow up speaking two languages: English and German. Also, my Bulgarian grandmother spoke Bulgarian to me when I was little, but after her death my mother wasn't able to keep that third language alive. Growing up with these different languages gave me an advantage as an actor: a good ear for different accents, and an ability to learn other languages more easily, but more importantly, it made me instrinsically aware of tone, how much gets lost in translation, how quickly we misunderstand each other, how hard it is sometimes to detach what is meant from the way it sounds - not only from the emotional tone, but also the dialect, class specific inflection, and so on. 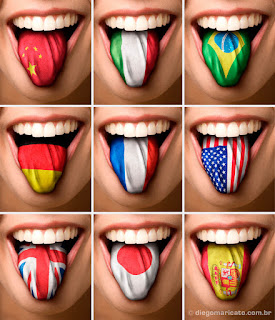 I have played so many different nationalities on screen (and in daily life) already-- I go between two and four languages within a day (having learned French and Italian out of love). Yet I feel that with each language I learn-- or more specifically, with each new word that I not only understand but naturally start using myself-- I initially lose part of (or at least confuse) my base languages somewhat. It will lead to me either using creative grammatical structures in English, or suddenly having an Italian melody when I speak German. Usually it's more funny than anything else, but when it comes to my work, it can also confuse people. Industry like to slot you in a box and limit who you are or could be, even when our job's definition is to embody so much more than just our own story.

These days, realising the importance of clarity and branding as an actor, I try to only highlight whichever part of my language history is important for the role I am auditioning for-- going as far as not even mentioning the other languages, or committing to the accent I am going in for; from start to finish. I have heard some casting directors find it irritating when actors put on accents or characters (especially if not done well enough), but I also know many casting directors who have been very impressed by it. The argument for it, is that once people know that someone is, in whatever way, not who they are claiming to be-- many are inclined to think they would have noticed it anyway, or doubt that the person can nail another persona authentically. However, I have been in embarrassing situations with colleagues claiming they spoke a language or an accent perfectly-- and it ended up cringe-worthy. So know the limits of your own abilities, which is the only way to improvement.

I am torn about how to speak in personal or in semi-business situations, like a chat at a film party-- because so much in this business depends on first impressions. For a very long time I strictly stuck to Standard American, cutting out any possible Southern Drawl (I went to High School in Alabama) or English inflection (a two year relationship with a British actors left some language residues) and neutral TV-German (as opposed to an Austrian accent). However, the more I work, the less I care: as I now have audio-visual proof of my ability to embody different nationalities authentically.

Who are we “authentically” anyway? In a society that is becoming more and more mixed, don't we all start sounding more and more globalised? I feel in many ways that TV and Film does not fully represent the multilingual, multidialectal life many of us lead - characters seem to all come from the same mold. At least Science Fiction continues to lead the way, where more diversity has always been possible, from “Terminator”  to “Game of Thrones” and “Wonderwoman”.